A First for Me and for my Friend Rachel

I have a friend named Rachel who said she would never have children, and now she has gone and made a gorgeous little baby girl named Poppy.  So for such a momentous and surprising First, I decided to make a baby quilt for her that would also be a First.  I attempted my first ever Dresden! 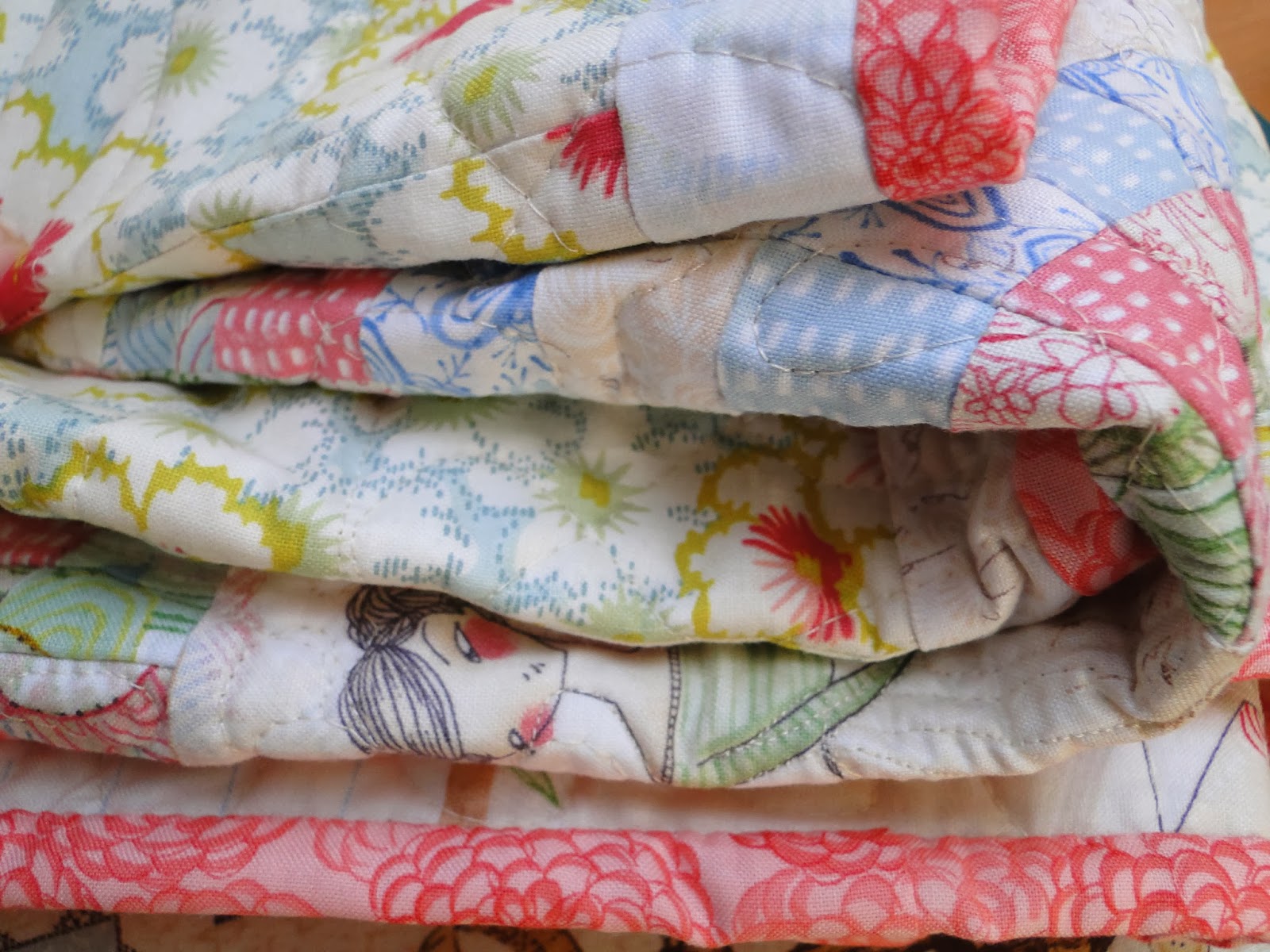 Here it is, folded and ready to go in the post for an adventurous journey all the way to Australia. 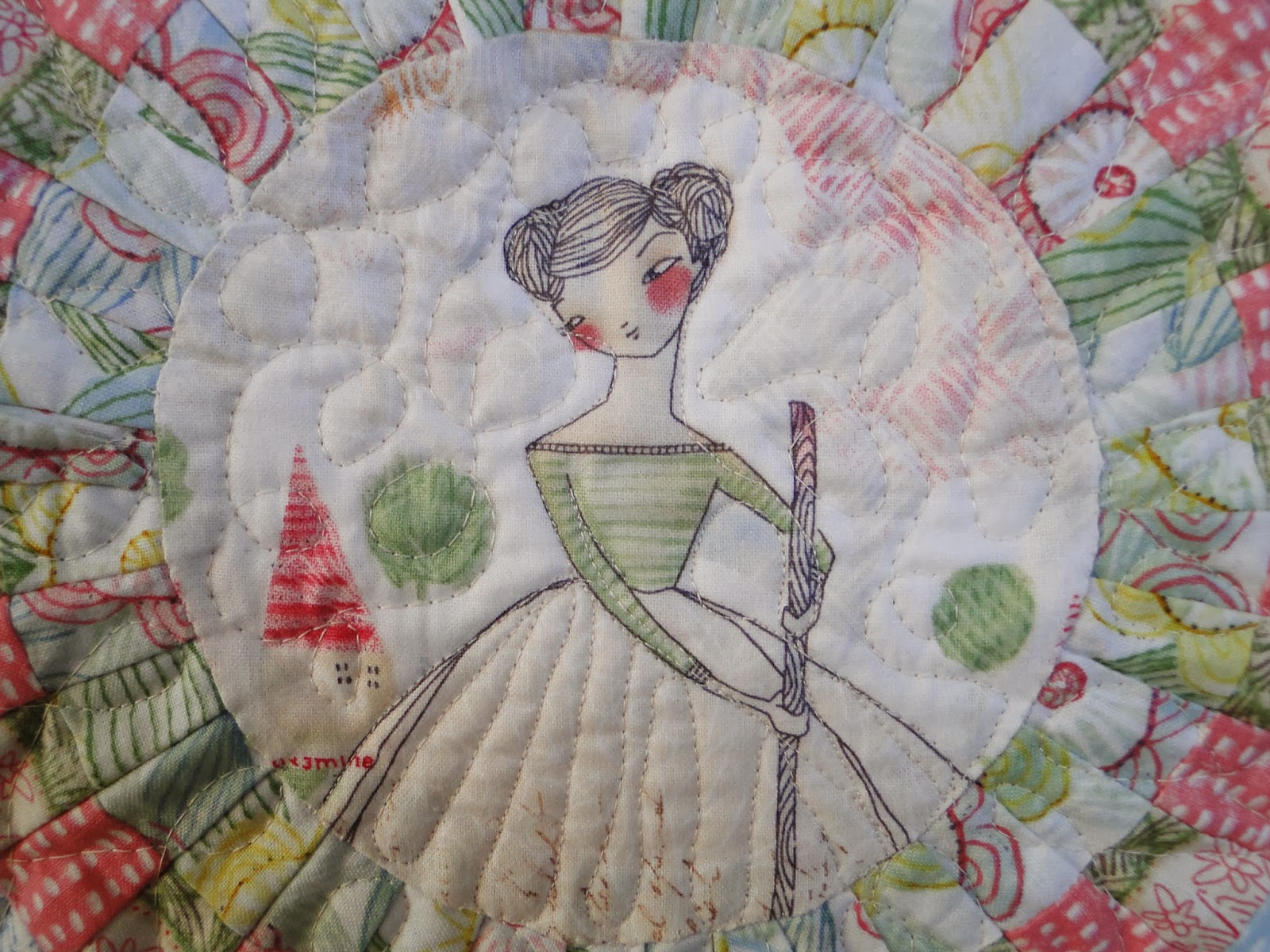 Here is the lovely young girl doing some gardening in the centre of my dresden.  I had appliqued this to the centre, which was easier than I thought it would be. 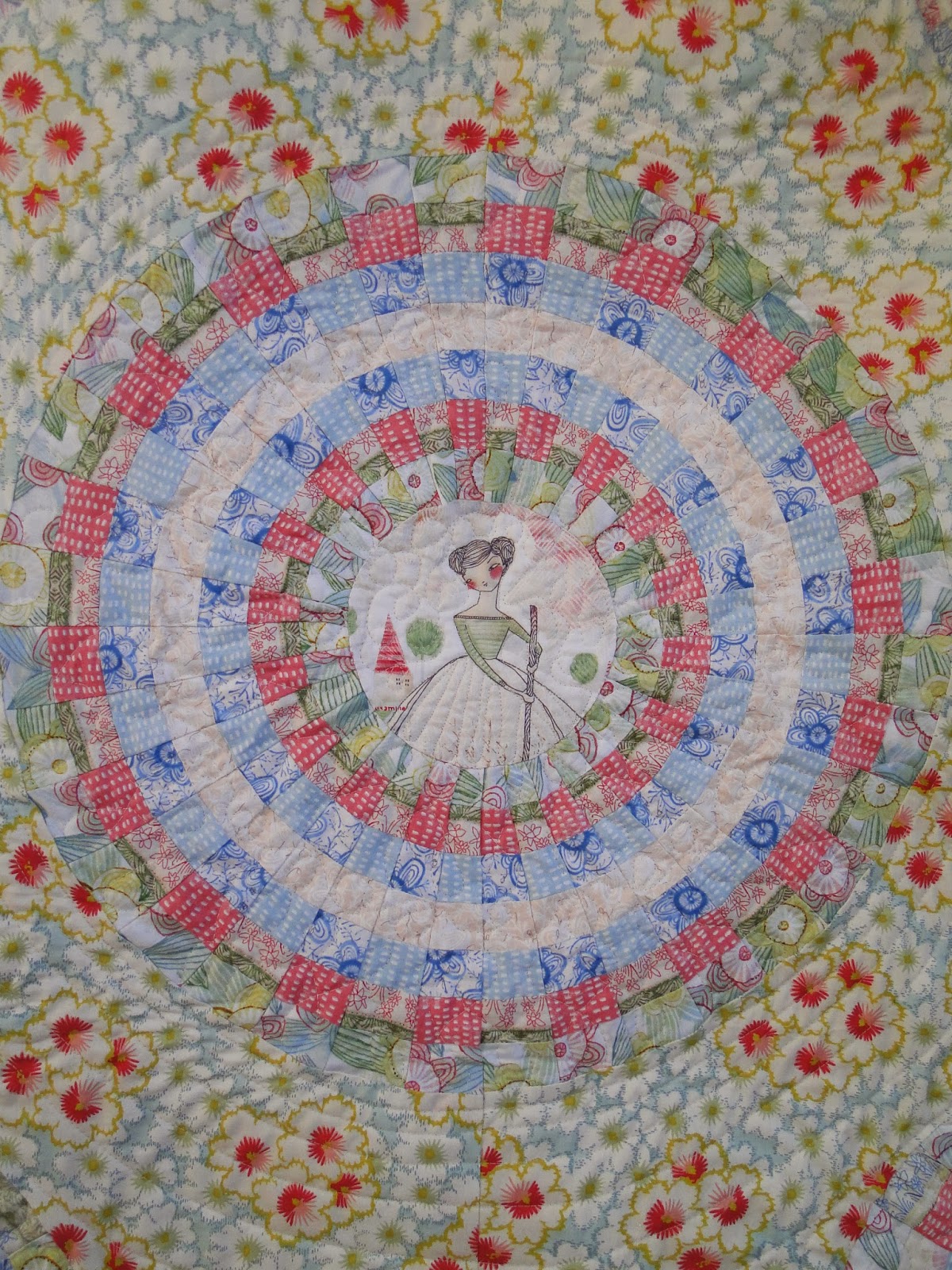 I even enjoyed doing the quilting on this one!  Using the free motion quilting foot on my sewing machine made the job quick and easy.
I made the centre dresden first, using matching colours, then made four more 90 degree circle pieces for the four corners.  I invented the background pattern pieces myself by measuring with a string and a pencil, and a good bit of fudging. 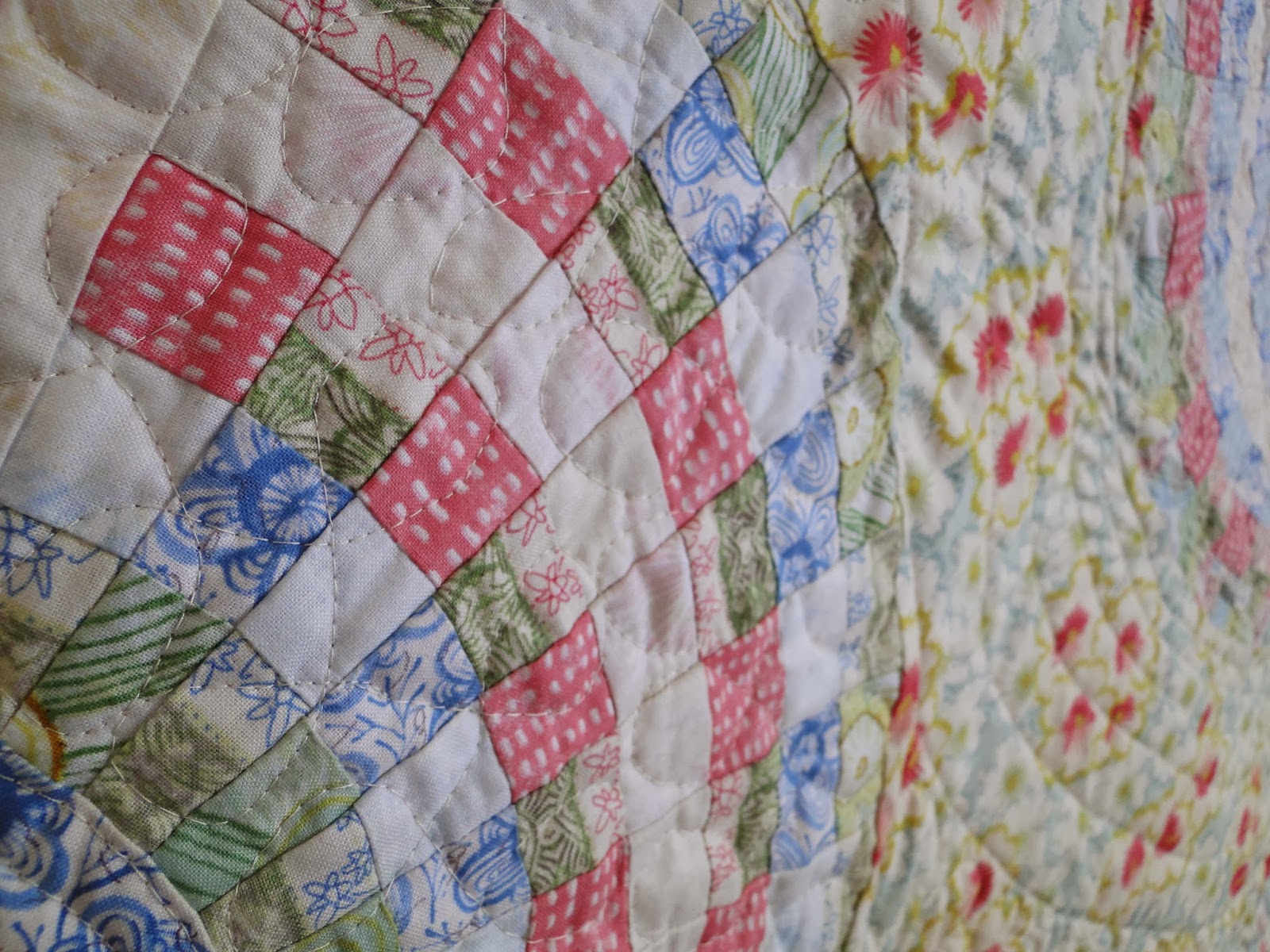 Sorry, I can't recall where I got the fabric for the binding or the background from, but the fabric I used for the dresdens, lovely girl and the backing are called The Sweet Life by Cori Dantini for blend fabrics.  I bought a bundle of eighth's of a yard pieces from Avery Homestore in Edinburgh last year and had been saving them for something special.
Speaking of the backing, it is gorgeous!  Lots of lovely panels, with girls doing all sorts of fun things!
I really hope she loves this as much as I do.  Now for the nitty gritty details...  I won't mind a bit if you just skip over these.  I've recorded the process for both my own records and for anybody else who might like to have their first try at making one of these out of some strips of fabric.  It really is a lot of fun and quite easy and satisfying sewing!

I started with a bundle of 10 coordinating fabrics from a 1/8th bundle and cut them into 1.5" strips along the longest side. 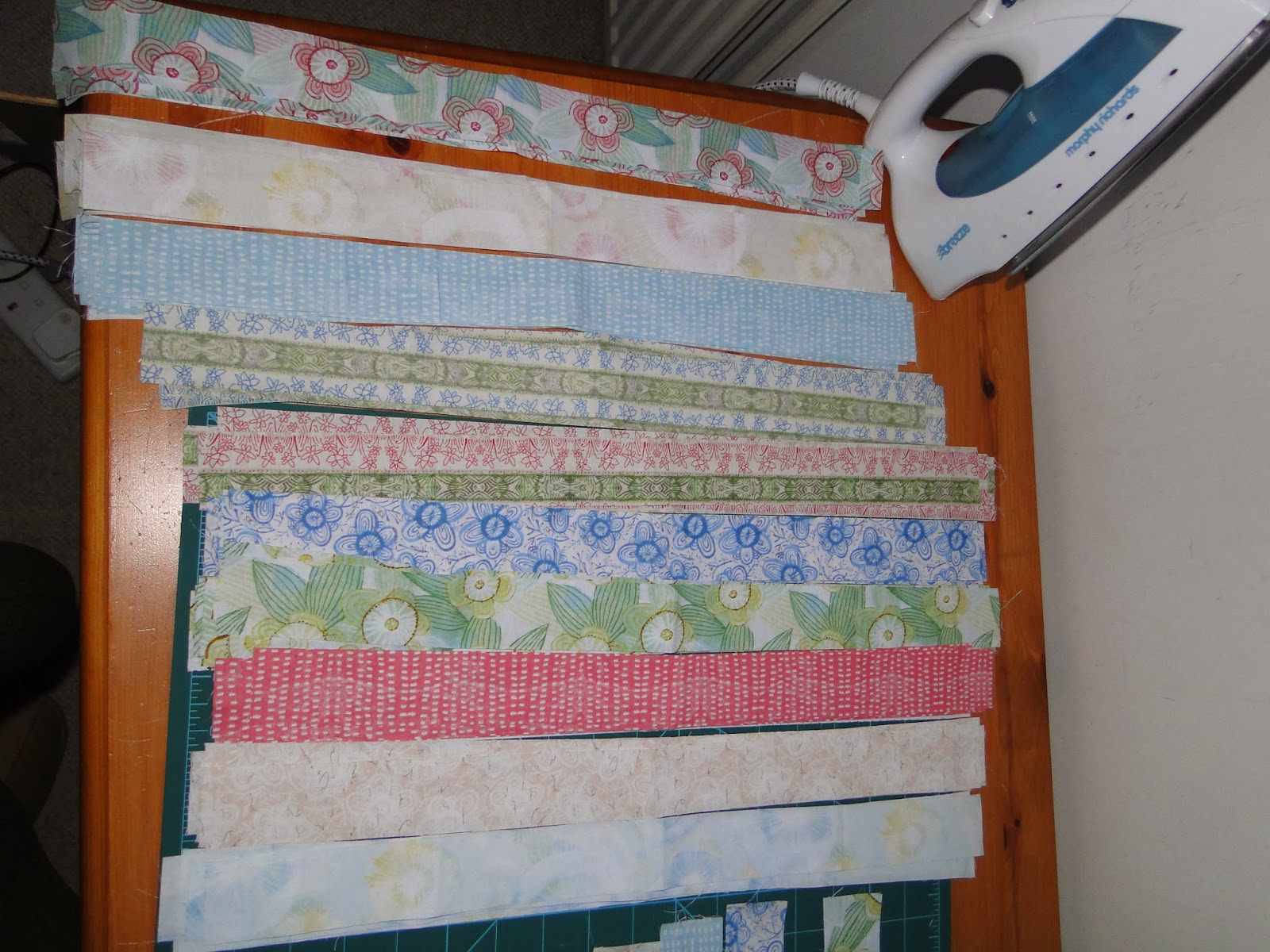 For the central dresden, I chose 7 strips and arranged them in a pleasing manner, then sewed them together, pressing all the seams in the same direction.  All seams are 1/4". 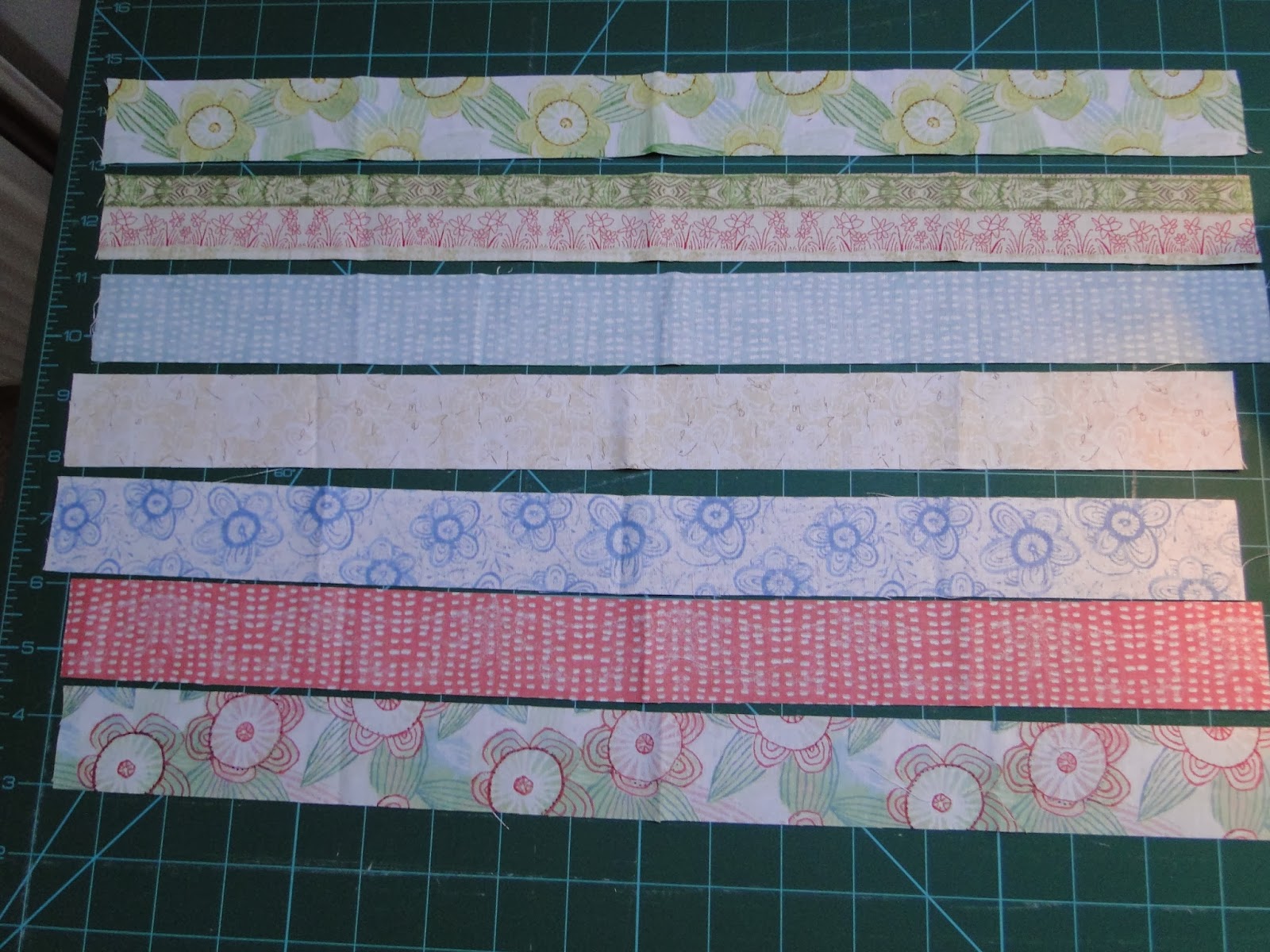 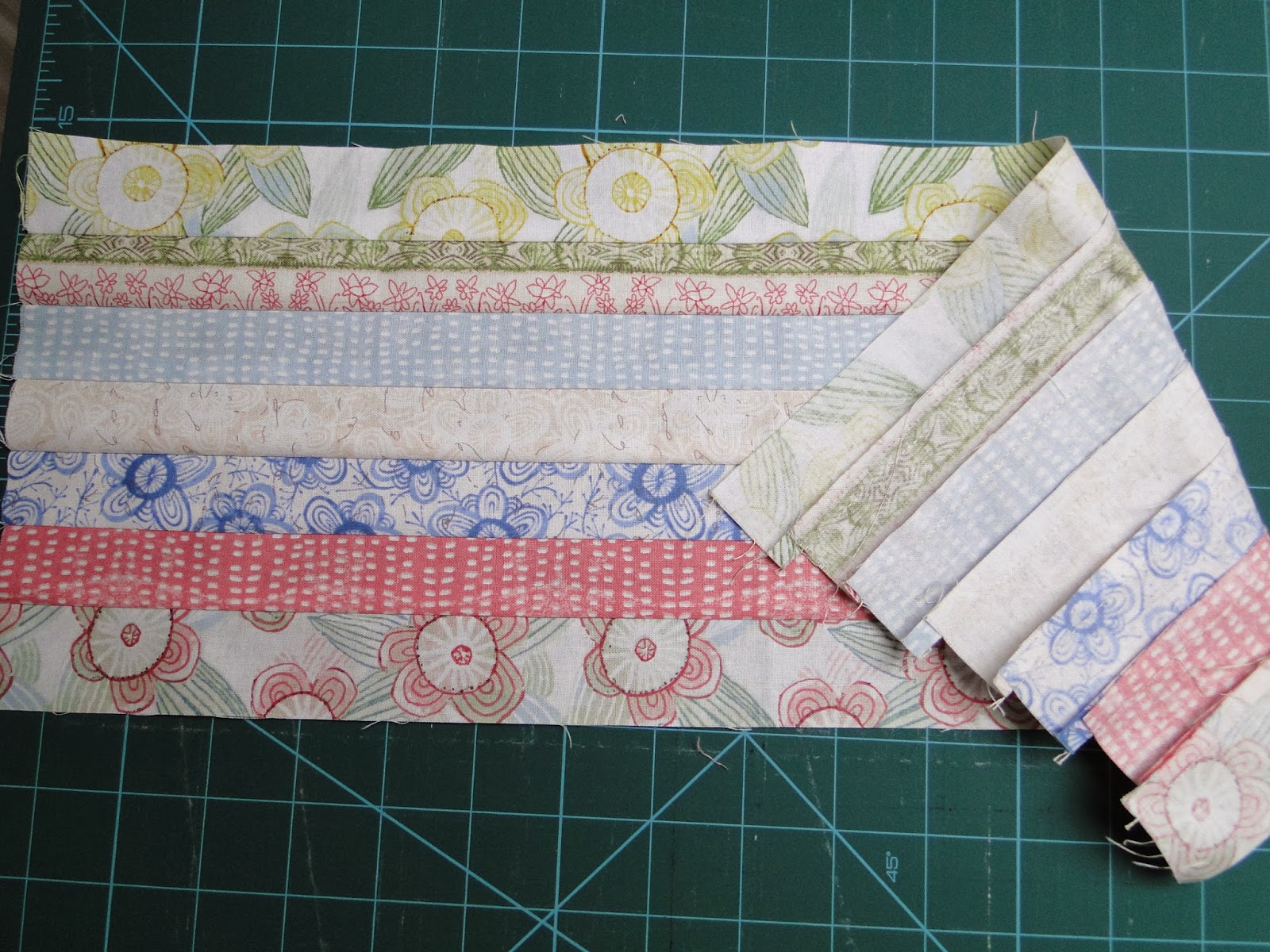 Then using the 10 degree ruler, and keeping it horizontal with the edge of the fabric, I cut the entire thing into as many wedges as possible. 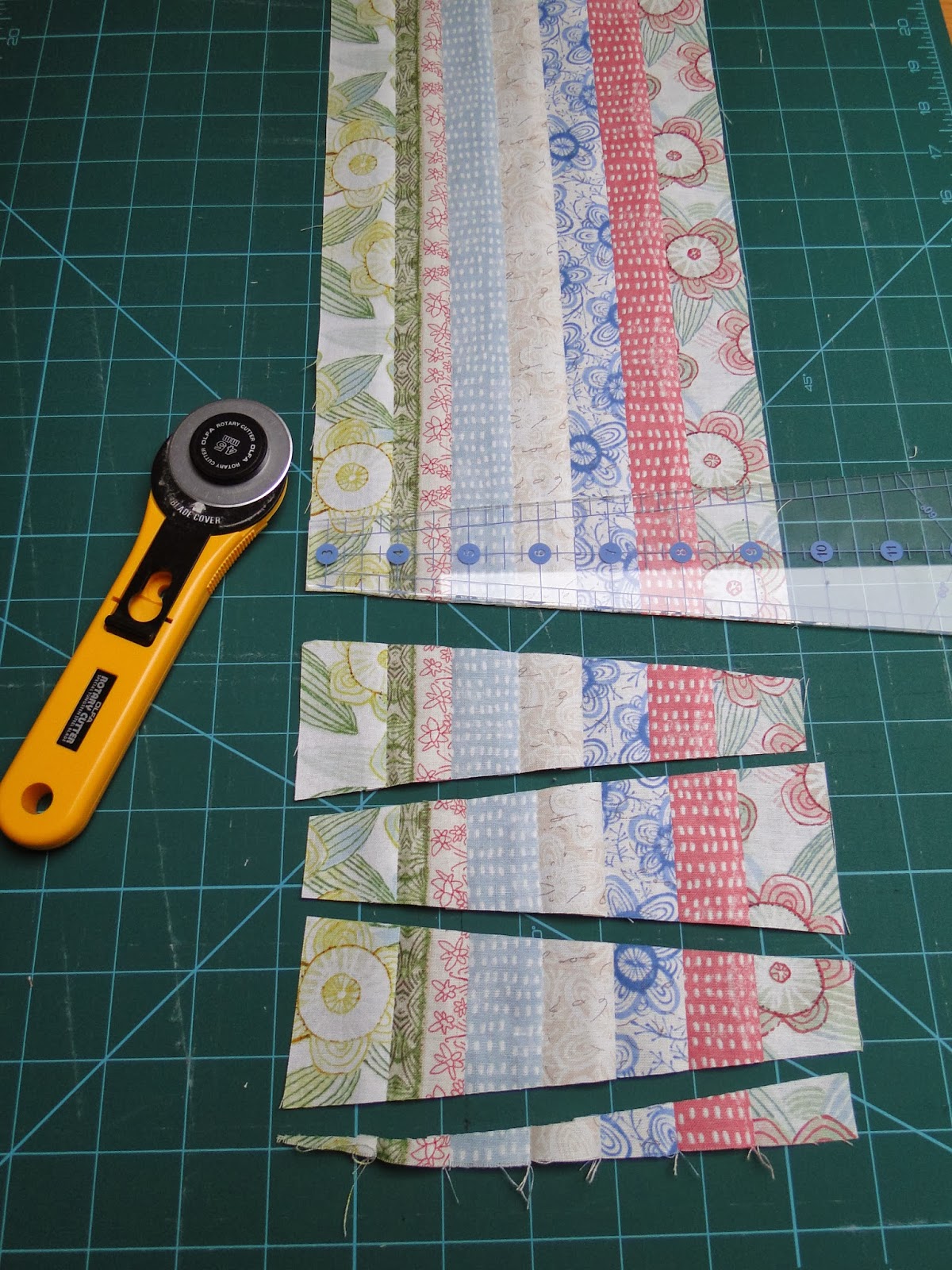 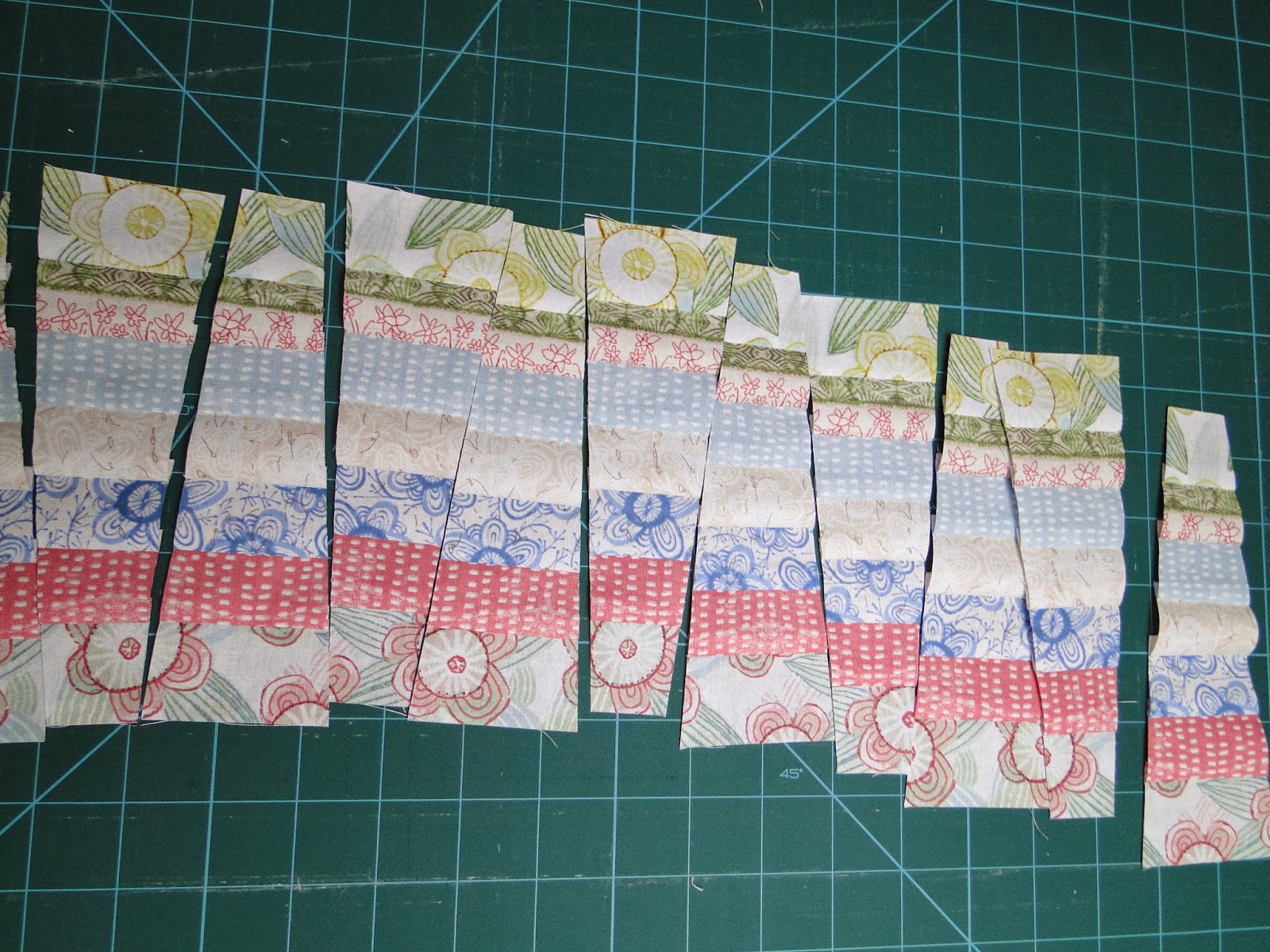 Flip every second wedge and arrange them side by side and you will see the final pattern emerging.  Each of the wedges made by this ruler will end up being 10 degrees, so to make a 90 degree wedge I only need 9. 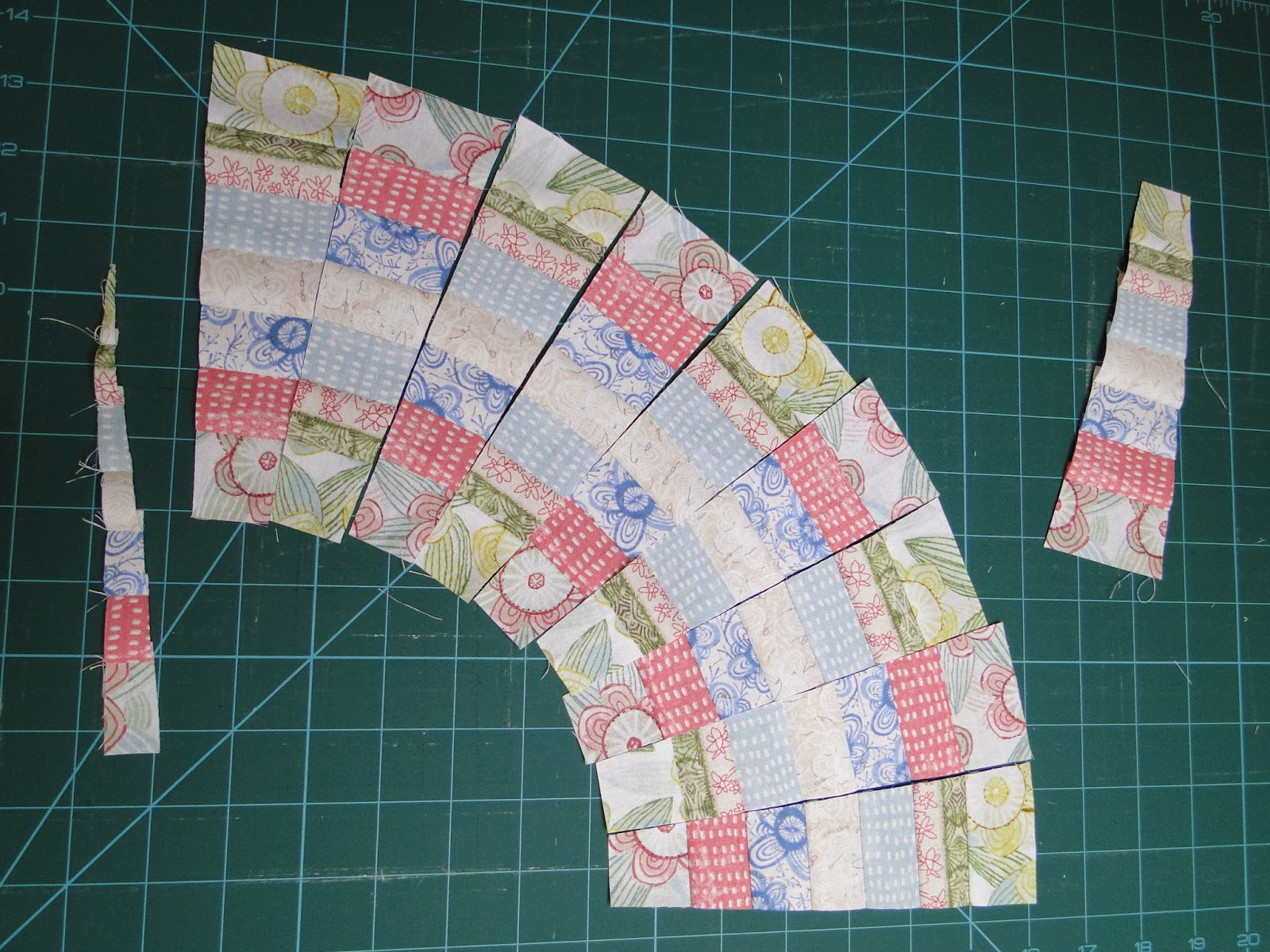 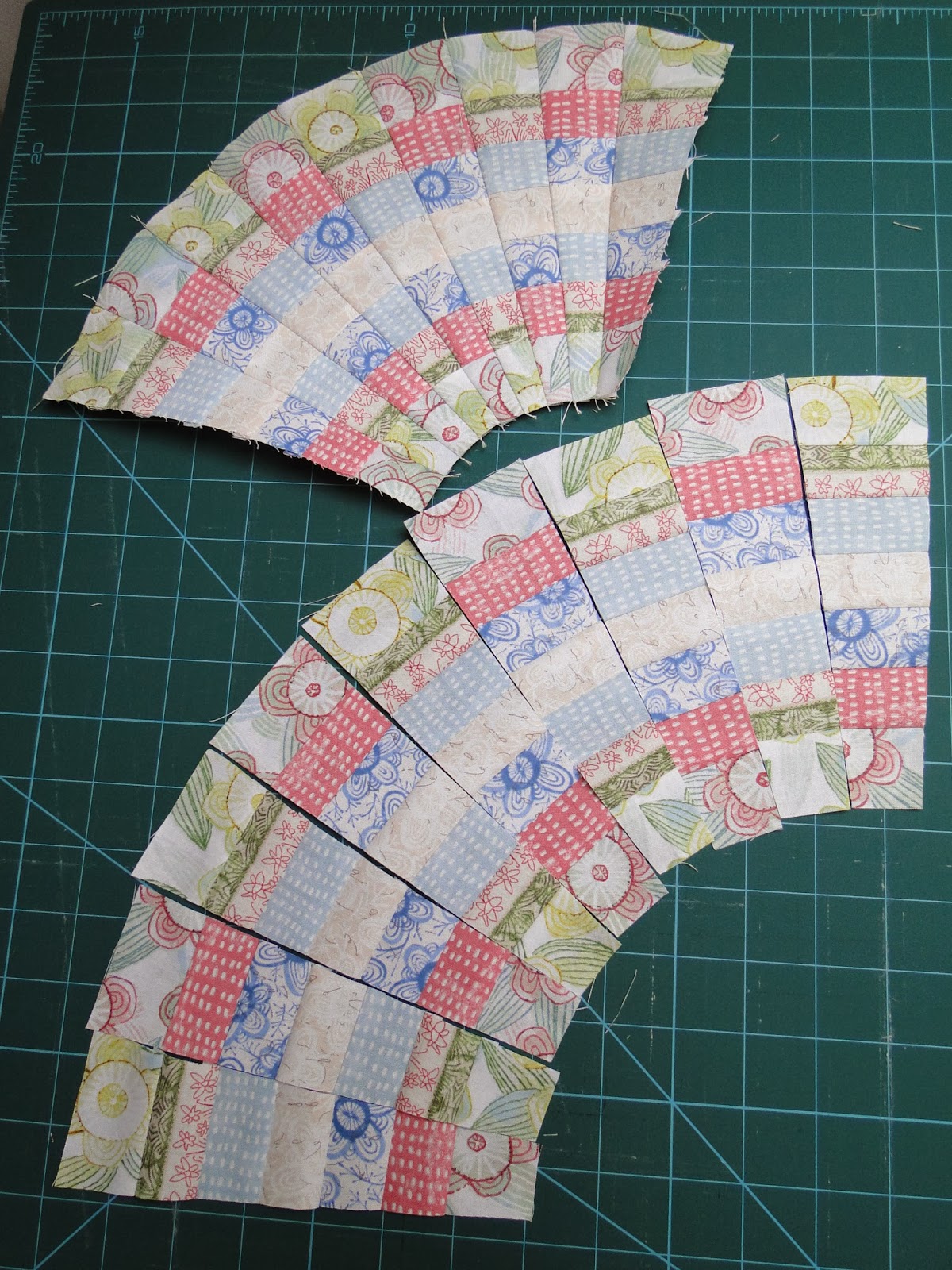 When stitching the wedges together, because you pressed the strip seams all in the one direction, the seams will now nestle together easily as you put them through your sewing machine.  I stitched the wedges into pairs, pressed, then into a set of four and a set of 5, pressed again then sewed all nine together.  All this pressing was done in the one direction too.


Repeat this process until you have four 'fans.' 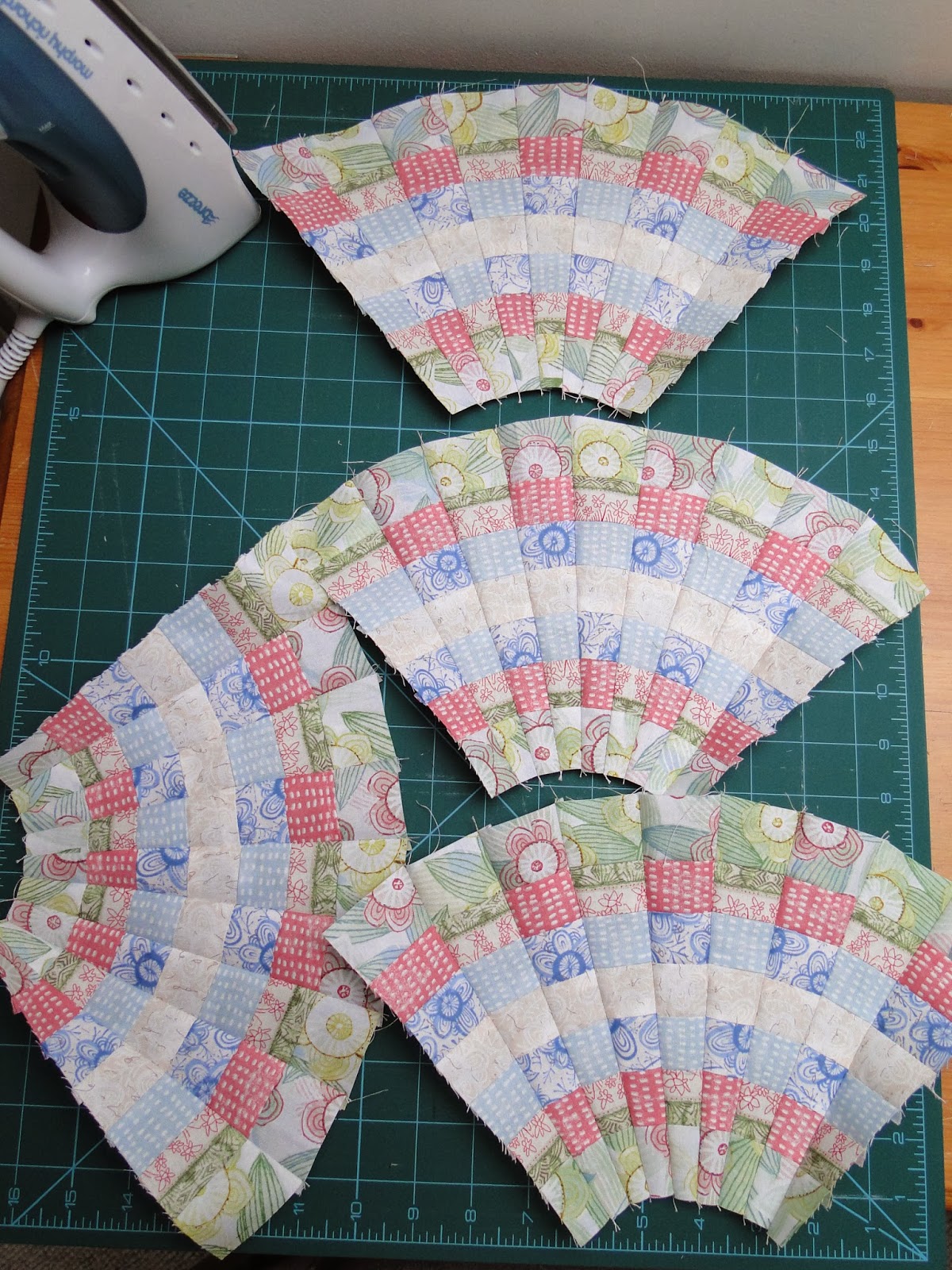 Then I made another four, but this time I used a variety of the strips.  To create the background space, I simply put one of the fans into the centre of a large piece of paper and traced the edge.  Then I put a fan into an adjacent corner and traced the large curve.  I used a pencil tied with string and pulled taught to the corner of the fan and paper, to make sure the line was circular.  I then added 1/2" to this piece of paper to allow for the seam allowance.  Putting this paper pattern piece on top of my fabric, I cut four pieces then sewed my fans to them. 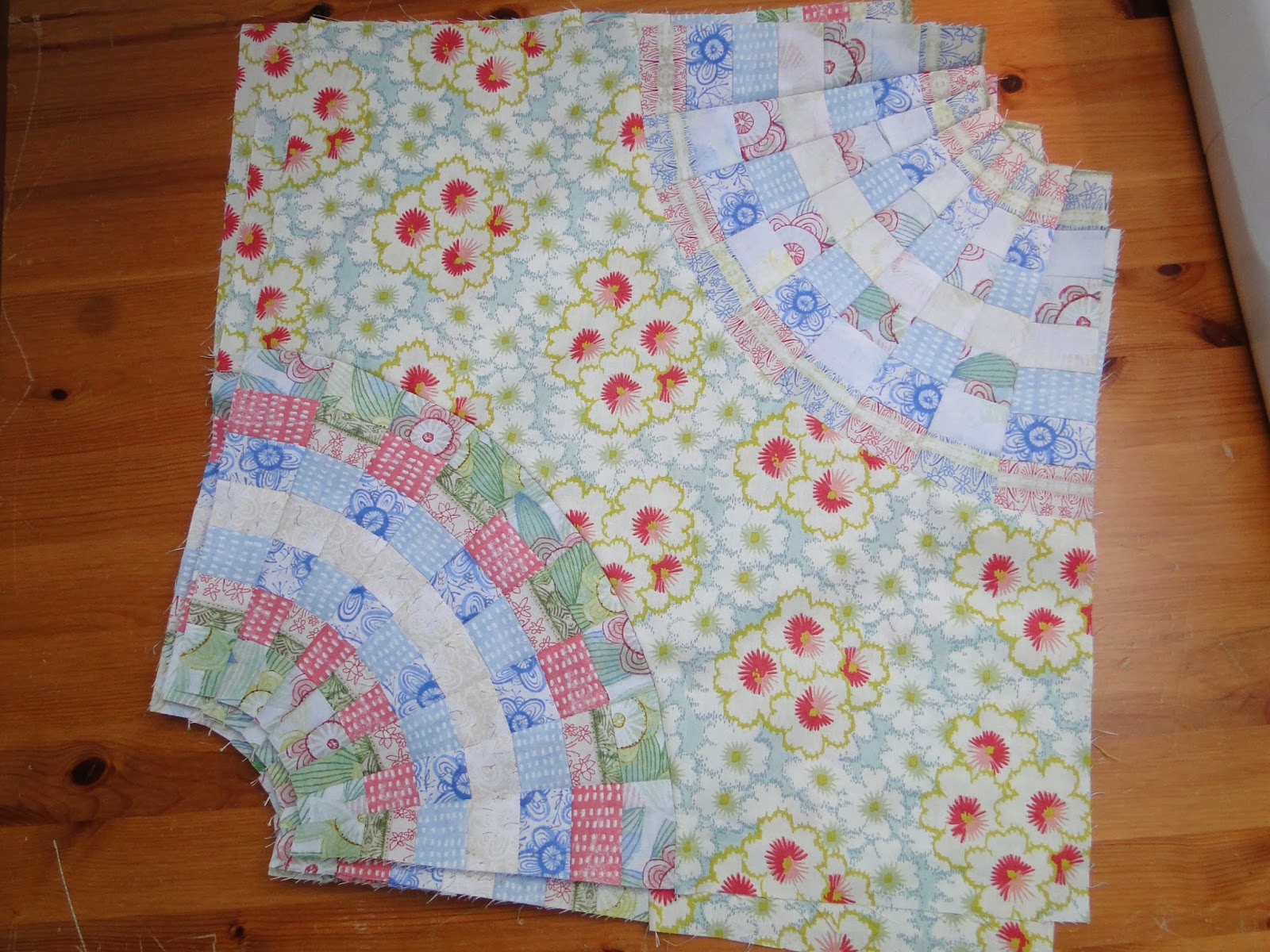 Then I sewed the four squares together. 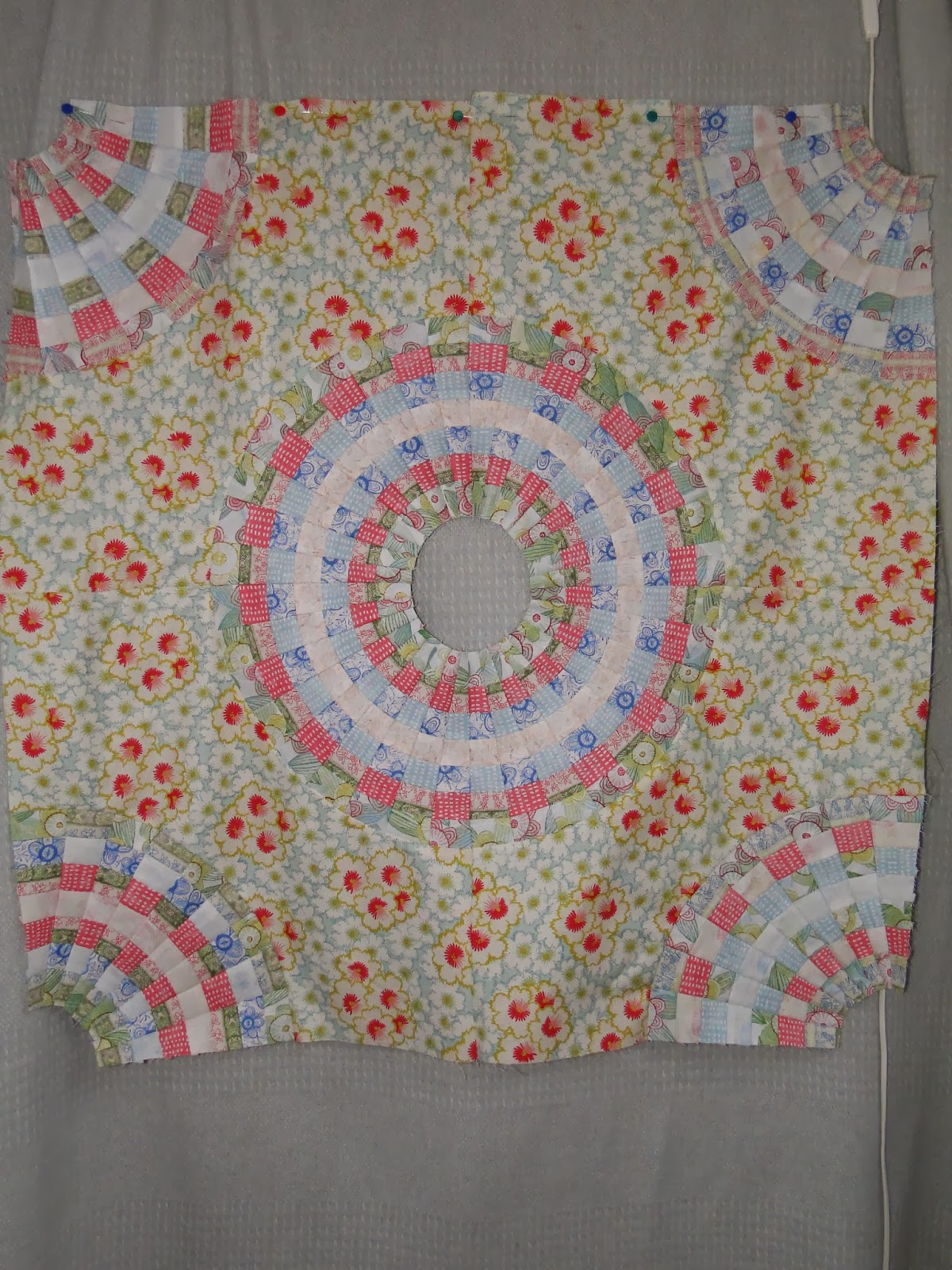 Next I cut out one of the young girls from the backing fabric and carefully hand appliqued her to the centre. 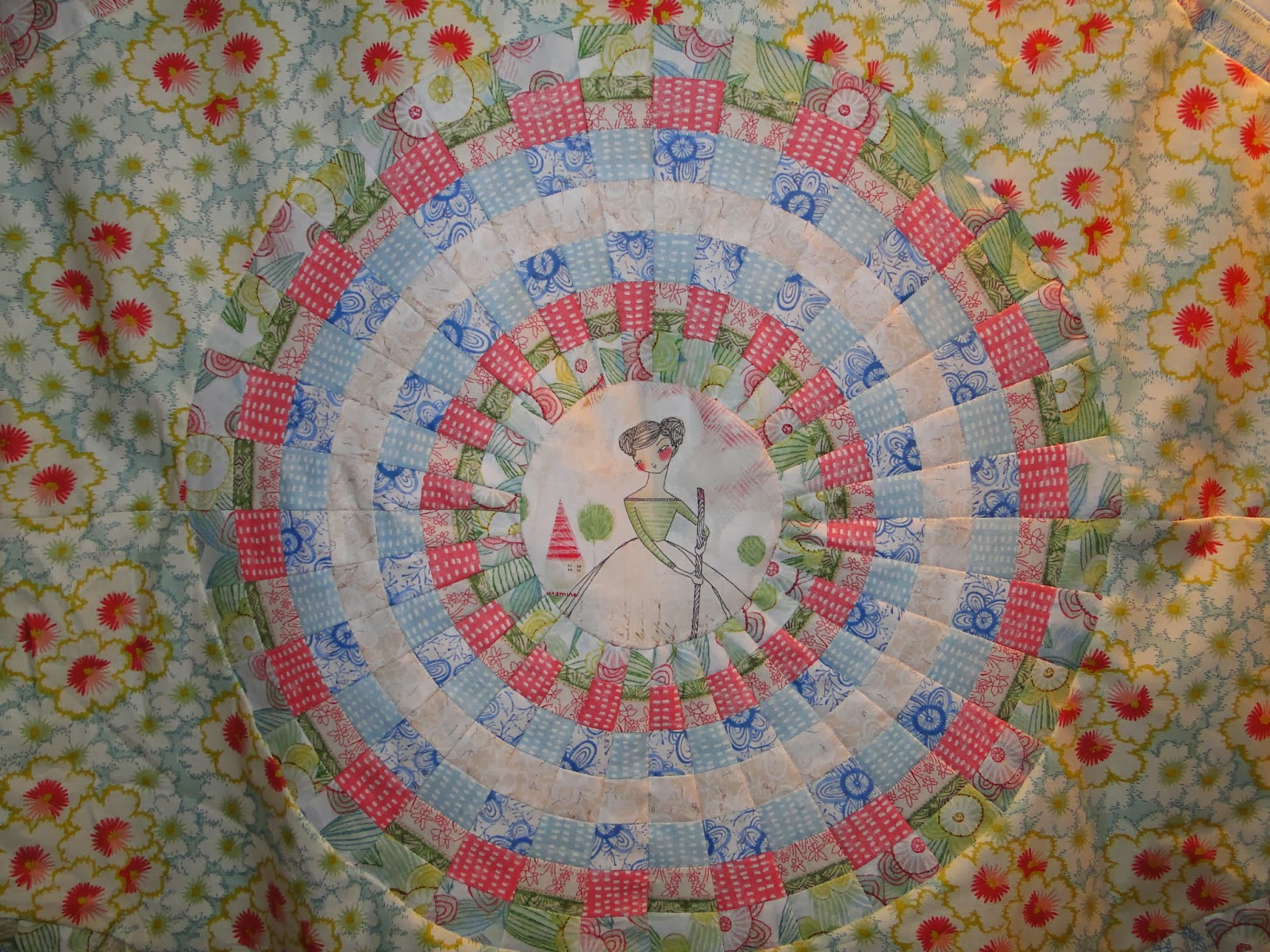 I did a similar pattern making thing with the four outside curved corners.  I used the corner of a piece of paper, placed the corner of the fan on top and traced the curve.  I fudged a guess of 1/2" seam allowance to make the pattern piece bigger, then used it to trace some of the fabric from the quilt backing to create corner pieces.  After that, I simply used some of the left over 1.5" strips to create a border around the entire square. 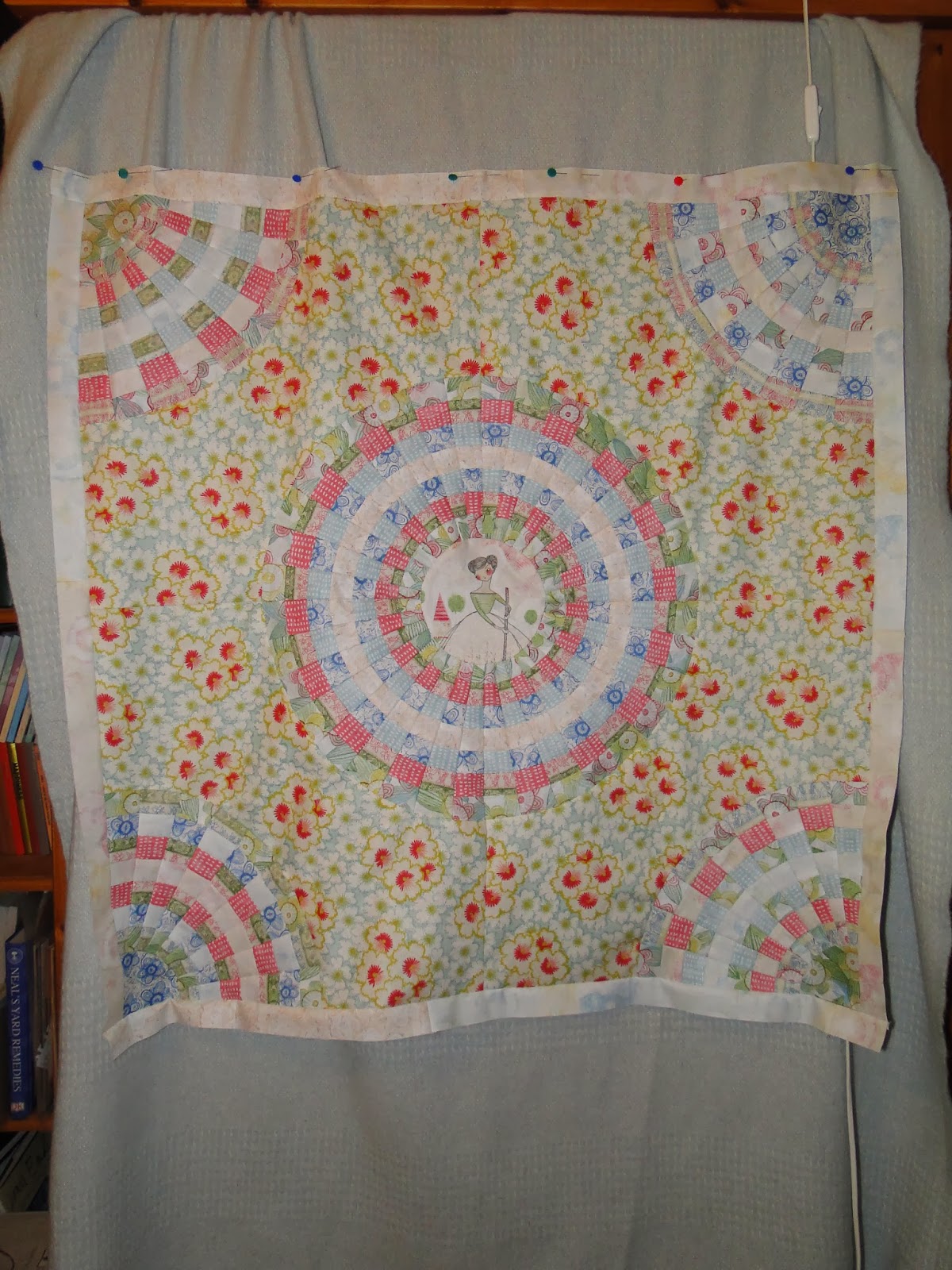 Feel free to ask any questions in the comment box below, if you were thinking of trying a strippy dresden!
So that's it! - One of my 2014 first quarter of the year goals completed!
This will be linked up to Katy's Finish-A-Long.
Labels: dresden, Poppy's quilt, Quilts, strippy dresden

Thanks so much for leaving a message - I do love getting messages!

I usually reply personally via email, but if you're a no-reply blogger then I will reply under your comment right here.
Thanks so much for visiting my blog!