Liberty Hexies put to good use

I bought these little hexagon papers and pre-cut fabrics from very kerry berry fabrics back in Autumn and really enjoyed sewing them together into flower shapes whilst commuting to Glasgow.  I didn't have any plans for them and so made it a goal to find them a home before the year was out.
And now the little hexie flowers do have homes: I made them into A6 notebook covers to give to friends! 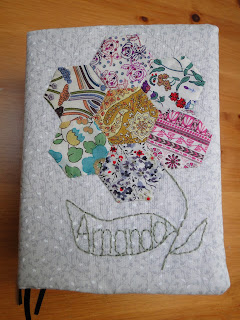 I have five female friends that work really hard and I hope that a little old-fashioned looking notebook will be well appreciated by them.  I used a running stitch to embroider their names inside a leaf shape. 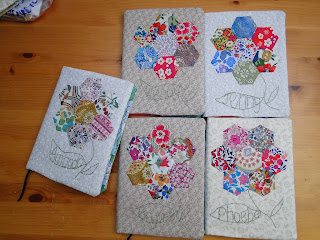 The inside flaps are made from a liberty lawn fat quarter that I received in a goodie bag at the Edinburgh Stitch Gathering. 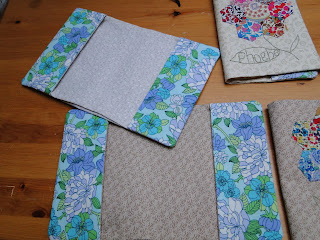 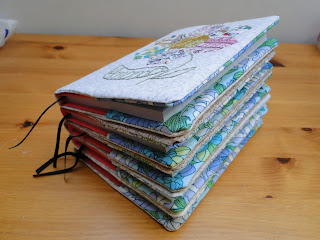 I even stitched these little "Handmade with Love" tags on the inside covers to give it a personal touch: 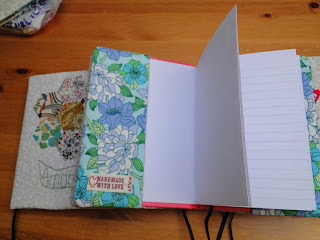 I am linking up with Leanne's Finish-A-Long.  This completes my list of Quilty goals that I aimed to finish before the end of 2013.
11 comments:
Labels: crafty, hexies, Liberty, notebook cover

I have completed my first ever Fair Isle knitted item and am so pleased with it!

I learnt how to do Fair Isle two-handed stranded knitting at an evening workshop with Deborah Gray, which I have posted about here.  Now a couple of photos of the hat inside-out to show the stranding. 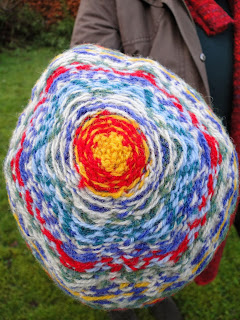 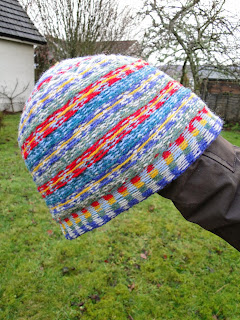 Deborah has made up these kits that include an original Kate Davies pattern as well as the exact measurements of wool required to complete the hat.  Such a good idea to buy it as a kit, as I have already started looking into creating another Fair Isle hat but having to purchase entire balls of wool just for a few rows of colour really makes the total cost add up! 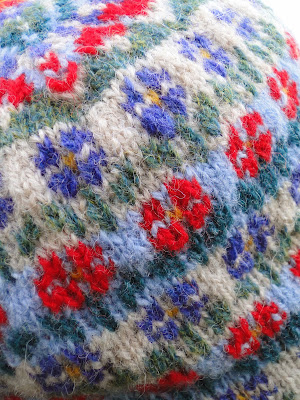 The pattern is called Peerie Flooers, meaning small flowers and is by Kate Davies, a stunning blog if you enjoy knitting design and Scottish landscapes. 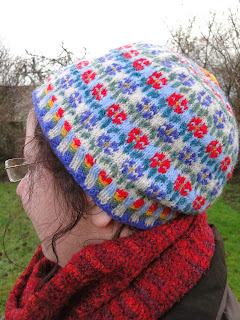 I knitted the medium sized hat which is slightly slouchier than the one Kate wears in the photos on her blog. 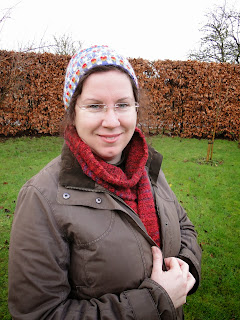 I loved knitting in the round and using the 'magic loop' idea.  Stranding the wool in two hands was easy and I didn't have any tangling problems at all!   Thanks so much to Kate for such a pretty pattern.  I am hoping to start the Scatness tam next!  And Thanks to Deborah for teaching these techniques to me.  She even talked me through the pattern over the phone when I needed help starting on the crown!

Introducing my sixth ever finished quilt: I am calling it the Garden Trellis!  The sun was shining for one morning this week and I was lucky enough to be at home with the Mister, so we dashed up the hill behind our house and took some photos of it, at long last. 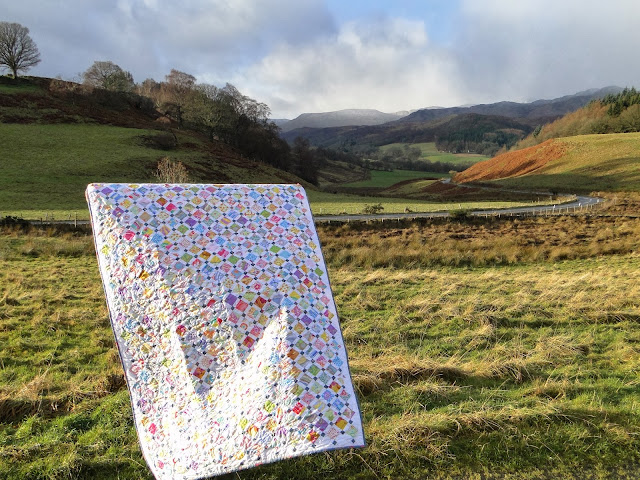 I have written a post about the construction of this patchwork top in November, over here.
I took it to Beechwood Quilting in Stirling, Scotland to get it quilted with a swirling stitch in some orange/green/purple variegated thread.  They had it done within two weeks and only cost £83, (that included the wadding) which is much cheaper than the cost to my sanity if I had tackled the job myself. 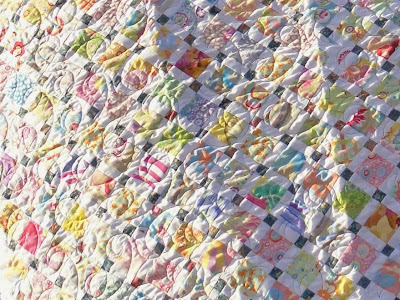 Brian, who quilted this for me, praised my piecing too.  He said that with so many small pieces he would have expected some stretched kinks and bumps, but my work was very flat and easy to work with.  Yay for me and all that pressing! 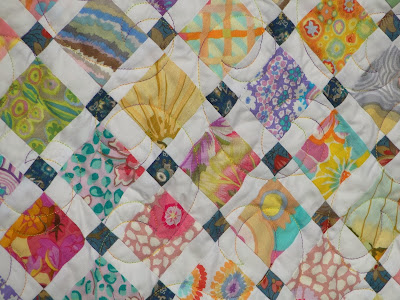 So here are a few more photos of me and my lovely quilt. 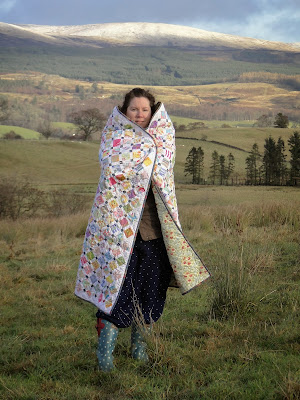 I was so pleased to finally see some sunlight that I just put my coat and wellies over my PJs and we raced up the hill to take some shots.  You can at least see some of the backing fabric I chose in this shot though. 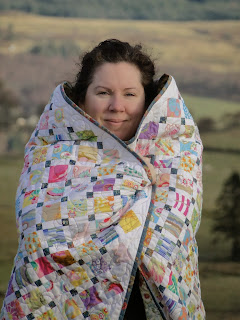 In too much of a rush to wait for hair styling or make-up. 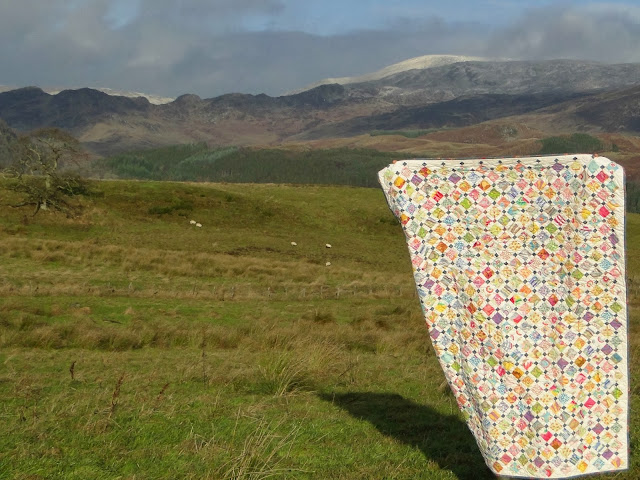 I love this shot with the sheep on the hill below us. 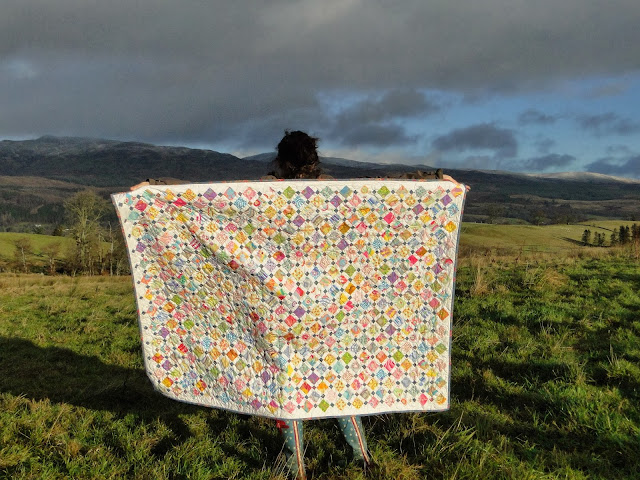 One last photo, before the sun is completely covered again. 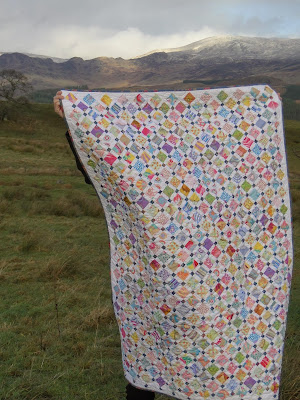 Back inside, OK, just one more: The obligatory photo of "Cats on Quilt".
This has been a goal of mine to finish before the end of 2013.

Hand sewing is perfect in Winter

At long last, I finally got going on my applique quilt again.  I have been at a standstill on this project for months, putting off doing this house shape, mostly because the size of the fabric pieces were larger than I am used to managing in my lap.  I would love to say that I have finished the entire quilt, but alas this is only one block. 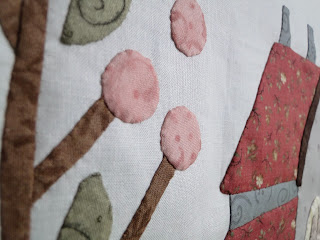 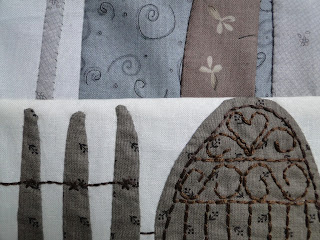 But at last this central block is finished, and measures 20" x 20". 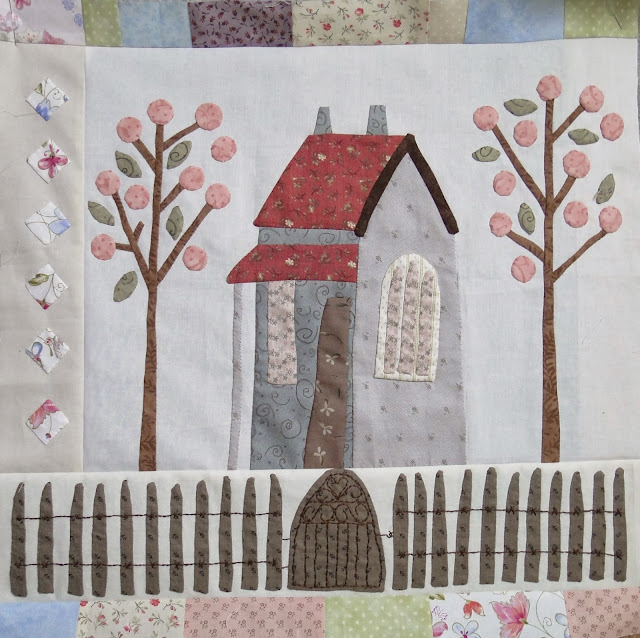 This square will eventually be the centre square of a nine square garden-themed quilt.  The pattern design is by Anni Downs, an Australian quilter who has a sweet blog and business called Hatched and Patched.
Below are the five squares I have completed so far.  Five down, four to go! 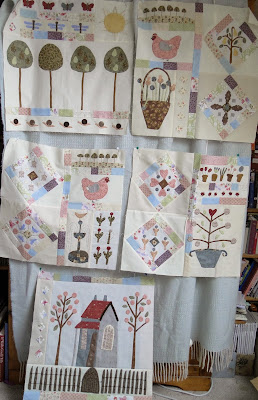 It is quite a naive style that I am usually not drawn towards, but for some reason I kept coming back to this patchwork garden idea and decided I would personalise a few of the features to match our own garden.  If you are interested you can read about the making of the other parts of this quilt here.

I was being a little hopeful and unrealistic to think that I would be able to finish all five remaining blocks before the end of the year.  But I am very pleased that I was finally able to finish this block at all, as it was somehow blocking my way forward and I just couldn't get started on it.  Thanks to posting this as a Finish-A-Long goal, I was at last able to smash through the stumbling block and am now confident that the next four blocks will get done very soon.

Not sure if this counts as completing my pie-in-the-sky goal, but I am pleased I have made some headway!
14 comments:
Labels: In My Garden quilt

I am a bit late in finding this TV series, but having now discovered it I wanted to share some of the costumes here.  The Doctor Blake Mysteries.  It is set in the late 1950's in a rural Australian town called Ballarat, which was a wealthy town founded on the gold-rush and rich farming.  The main character is a clever, melancholy, handsomely bearded Doctor who not only sees regular patients but also works for the local Police to help identify causes of death.  Now, I am not normally one for murder shows but I LOVE the setting and the costumes in this program, so have decided to ignore the dead body that features in each episode!  The filming has been done beautifully and the writing is well-layered.  This is definitely going to be a series that could do with repeated viewings.
So, onto the dresses! 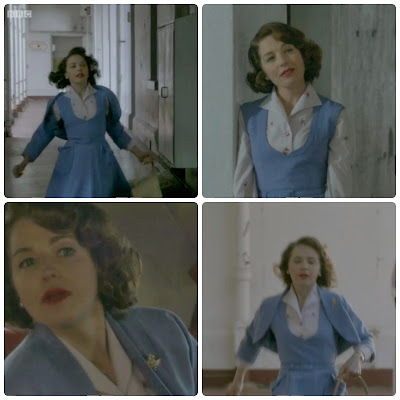 The first outfit to love is this dress and bolero worn by the character Joy.  She is from the big city Melbourne and so has slightly more sophisticated clothes than the other ladies. 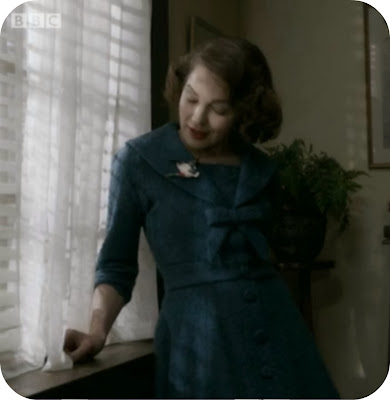 Another stunning dress on Joy, this one is in a bobbly sort of wool, and she is wearing a flying mallard brooch! 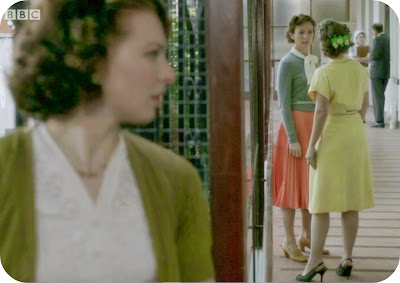 Here is Maddy overhearing the ladies speaking.  Love the many full-length shots of the costumes in this program! 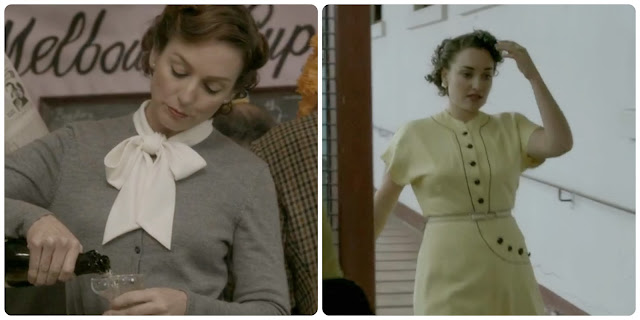 Look at Hazel's pussy bow blouse!  And the side-button detail on the yellow dress! 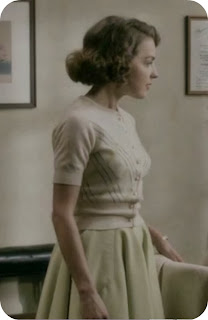 Here is an everyday outfit on Joy.  It is mostly everyday outfits in this show, but in one episode that I've seen there was preparations for being a bridesmaid, and they were sewing the dress at home!  Here is the final fitting - it even has a lapped side zipper. 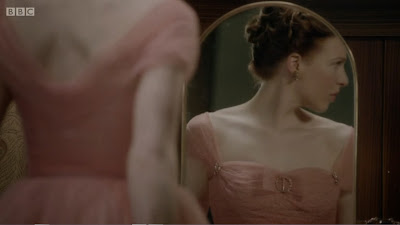 Here are the ladies of Doctor Blake's home, chatting with the Bride-to-be visitor who is wearing a gorgeous floral dress.  And look at that kitchen!  It is so authentically 1950's Ballarat!  (I lived in this town in my 20s so have an extra thrill to see so many familiar places shown so beautifully on the screen) 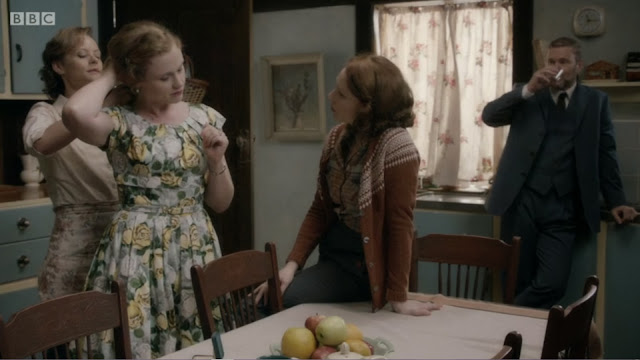 In the UK, The Doctor Blake Mysteries are being shown on BBC One in the afternoons, but there are still some available on iPlayer at the time of writing this.  In Australia, where this was made, they are currently filming the second series, and is aired on ABC One.  It is available on DVD too, if you're interested.

I haven't seen all of the episodes, so these are just the ones I've seen so far.  Which dress did you like the best?
7 comments:
Labels: costumes, The Doctor Blake Mysteries
Newer Posts Older Posts Home
Subscribe to: Posts (Atom)